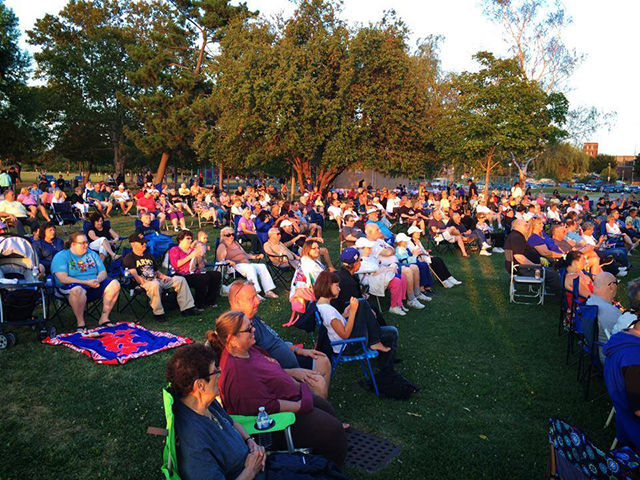 For over 30 years, the Summer Sounds by the Bay has been a town favorite in the park during the summer! Great music at a great setting!

”We are ready for a great summer! We have a great lineup of music and we are looking forward to seeing everyone enjoying the summer nights!” stated Pete Amadeo, Supervisor of Recreation.

The concerts begin promptly at 7:00pm at the lower level of 16th Street Park at the amphitheater stage.

Who listened to Cousin Brucie's legendary radio show on 77, WABC ? Yes, that was before FM radio even existed! Who remembers watching Evil Knievel try to jump the Snake River Canyon on the Wide World of Sports in 1974? Who saw The Godfather in a movie theater back in 1972? We bet you saw it more than once too! Who saw Jaws in the summer of 1975? Bet you didn’t go near the ocean after that.  Even if you're not old enough to remember any of those amazing moments,  how many of you feel that the 1970's were one of the greatest musical decades in history? The 70s are back, Not only as our nostalgia, but for you, your kids and even your grandkids to rediscover in today's hit movies and television shows.  Super Trans AM is a band your entire family is going to love.

Winslow Tribute Band celebrates the iconic American Band The Eagles. This powerhouse ensemble recreates the live performance of The Eagles and the signature sound that made them one of the most successful artists in the 70’s.  A passion for detail, Winslow's multi-lead vocalists authentically capture the soaring 5-part harmonies, precise instrumentation, and stage showmanship as they perform The Eagles music catalog of greatest hits, deep cuts, as well as some of the solo work of Don Henley and Joe Walsh. From their outstanding emulation of the a cappella harmonies of “Seven Bridges Road” to the precision of dueling guitars in “Hotel California”, Winslow deliver a true “Eagles” concert experience you will not forget!

You will not believe your eyes! “ Long Live The Beatles”, the longest running Beatles show in the country, is an all live musical event with an incredible show-stopping impersonation of one of the greatest musical groups of all time.  The show creates an evening of unforgettable nostalgic entertainment, recreating the sights and sounds of the Beatles from 1962 to 1970.

AM GOLD is a New York City based tribute band, performing the adult-contemporary hit songs from the late 1970’s through the mid 1980’s. Artists include Hall & Oates, Steely Dan, Huey Lewis, Christopher Cross, Lionel Richie and so many more! Most of this Southern-California based music has recently experienced a revival known to many as Yacht Rock. This smooth style of music has stood the test of time. Baby Come Back!

Imagine yourself listening to the amazing hits of the Beach Boys, while watching the smooth moves of Frankie Valli and the Four Seasons.... Lights Out has re-imagined what The Beach Boys  would be like if this actually had happened.  Sing along to all of the west coast hits while you dance along with moves created by one of the greatest groups to hit the musical landscape. Get up and party with LIGHTS OUT!

The Amish Outlaws will constantly surprise the audience and keep everyone guessing as to what they could possibly play next, from Johnny Cash to Jay Z, Lady Gaga to Snoop Dogg and Dr. Dre, Pitbull to Elvis Presley, Luke Bryan to Dropkick Murphys, to theme songs from the TV shows they have come to know!

For more information, please contact Amadeo at 201-858-6129 or email BAYONNEREC@AOL.COM.